Home » blog » A guardian for the poultry – our new Maremma pups

A guardian for the poultry – our new Maremma pups 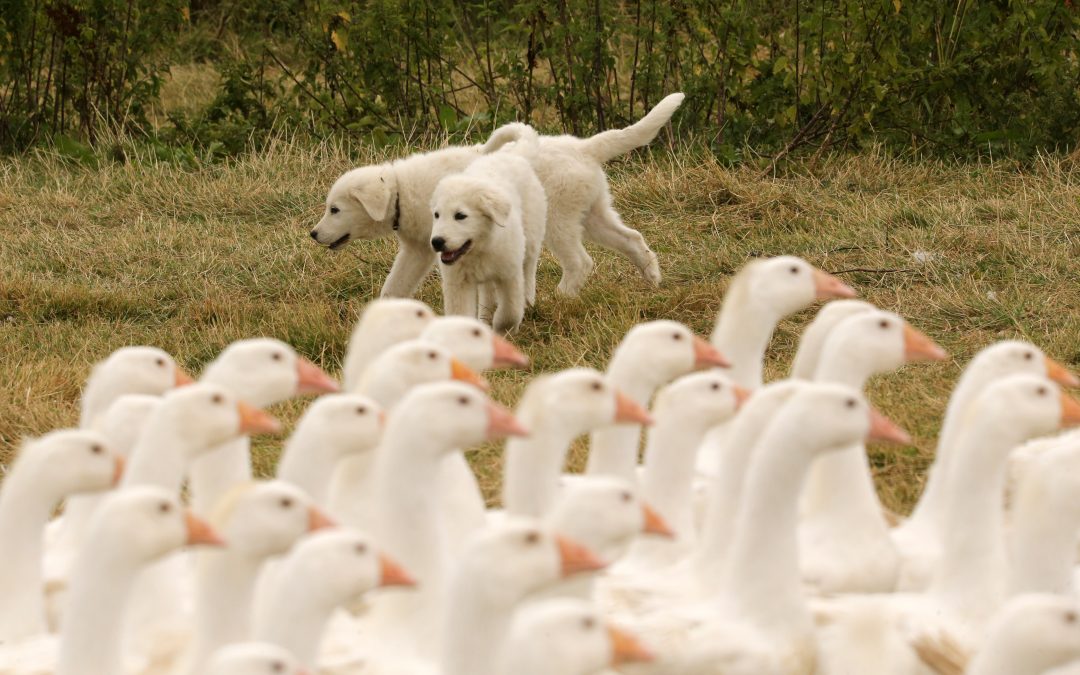 When something this cute comes home to Farm2Fork we just have to share it with you.

They’re Maremma Sheepdogs – a breed from the region of Tuscany and Lazio in Italy where they take their name from. Their job is to guard the poultry and fend off attackers like badgers and foxes.

At the moment They’re just getting trained up, but they’ll soon learn to guard their chicken and geese companions fiercely.

You may remember that we had a pair of guardian alpaca to trial, who were looking after the chickens. They have now been returned to their owners. We decided that we needed an animal that could live more closely with the poultry so that when a threat comes nearby the animal is close enough to react. Nala and Lulas fit the bill, we hope.

Maremmas are really rare in the UK. In fact, this method of protecting livestock is pretty unheard of over here. But over in the USA, and where they come from in Italy, it’s very common to see a dog or a pack of dogs guarding livestock. In fact, the idea of a livestock guardian dog can be traced back 2,000 years ago, to Roman times.

The bonus with using a dog to guard livestock, rather than relying on a farmer with a gun, means that we are being environmentally conscious, and rather than getting rid of predators and leaving a gap for new ones to move in, we are managing the threat and keeping them away effectively without upsetting the balance of nature. We’re keen on leaving nature alone to do its own thing – so this method suits our farming practices perfectly.

Nala and Lula’s breed has been used for centuries across Maremma and beyond by Italian shepherds to guard their sheep against wolves, but they’ll guard anything they bond with. Putting Nala and Lula in with the chickens and geese at an early age means they’re already bonding with them.

Nala and Lula will be full-time protectors of the flock. Often the presence of a livestock guardian dog is enough to ward off predators.

Although Nala and Lula need to bond with their new poultry family, they need a lot of handling from us here on the farm. They’ll need lots of supervision as they won’t be fully reliable as guardians until they’re at least two years’ old.

It’s largely instinctive for Maremmas to protect their herd or flock, and they live together with them happily.

We’ve got our work cut out with Nala and Lula but we’re sure that they’ll grow up to be vital members of the Farm2Fork team. As for Clover, our spaniel, well she’s not too sure yet about the Maremma pups. Nala and Lula are taking everything in their stride and aren’t bothered at all by Clover’s presence….. we’re not sure the same can be said of Clover though!