Christmas Goose is making a comeback 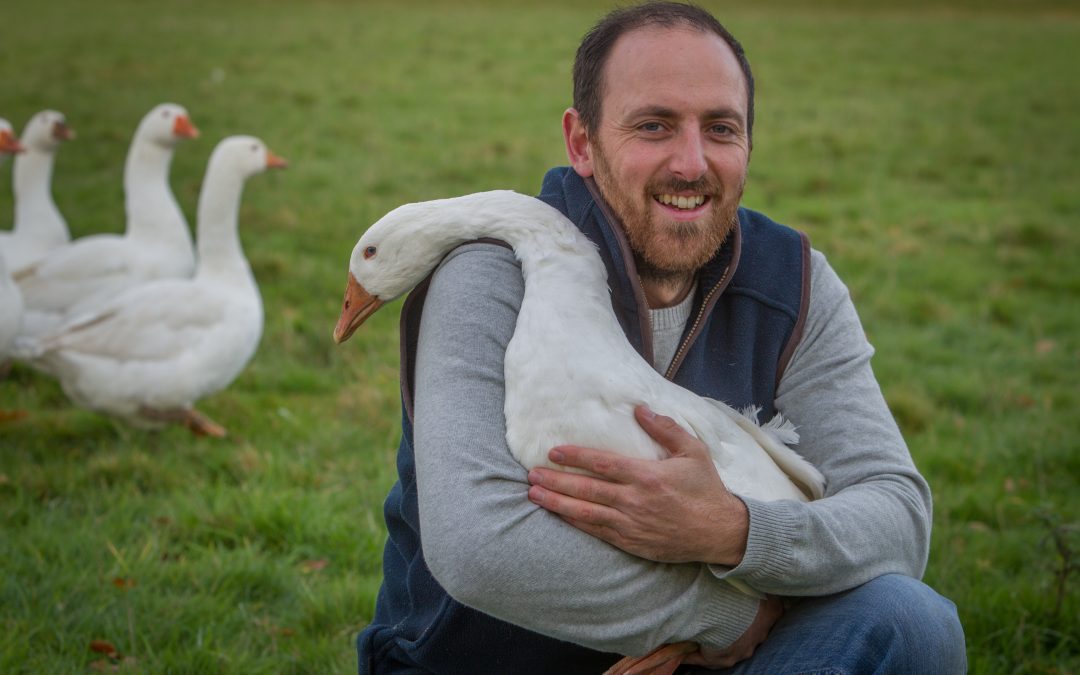 Christmas is coming and increasing numbers of geese are getting fat on farms throughout the West.
Once the festive season’s bird of choice for many British households, the goose was largely supplanted by the American custom of cooking turkeys to celebrate special dates in the calendar, a trend that exploded in the UK with the expansion of Bernard Matthews’ farms in Norfolk. Goose, whose fat is now keenly sought by gourmands, also lost out to the general move towards leaner meat, with numbers reaching a low of just 100,000 during the 1970s.

Now it’s gradually making a comeback and is especially sought by people who looking for less intensively-reared meat for their Christmas table. Slow-growing goose brings a certain specialness due to the way that their eggs are only fertile during the spring through to the summer, which means their meat is only available later in the autumn and during winter; over the centuries it was often associated with Michaelmas as well as Christmas.

At the same time there has been little effort to hybridise geese in the same way that turkeys and chickens have been bred to be double breasted for more meat. Yet while geese usually reach no more than 4kg to 6kg, and stay on farms for around twice the time of some turkeys, many seek them out for their flavoursome meat.

In recent years many farmers have opted to rear Legarth geese, a heavier meat strain from Denmark.

Yet while goose is rising in popularity, it’s still pretty much a niche market with some way to go to match the 10 million turkeys consumed over Christmas.

Oliver White is ambivalent about the weather as Christmas approaches.

A cold snap means his flock of geese will be that much heavier in time for their starring role on hundreds of festive tables, although it will make looking after his cattle and sheep harder work.

“Short days and colder weather are a trigger for the birds to migrate, before which they would put on a bit of extra fat to fuel their flights,” explains Oliver. “The goose sector can struggle a bit when the weather is milder. I am conflicted because it’s great to leave my other livestock out grazing for longer. Wet weather is bad for everyone. It’s about getting a balance.”

Geese provided Oliver with a route into farming and remain one of the key elements of his mixed enterprise.

The 35-year-old comes from a farming family, but the dairy herd that belonged to his father and grandfather had long gone by the time he decided to pursue a career in agriculture.

In 2010, while still living with his family and working as a project manager at Hestercombe Gardens Trust, he acquired 57 geese to fatten for the Christmas market, an experience through which he learned some valuable lessons in terms of sales and distribution, especially the need to be organised.

Eight years on, and four years into his 125-acre council tenancy at Greenway Farm in Dowlish Ford, near Ilminster, he’s busy rearing 450 birds, which he sells to customers all over the UK.

Oliver’s geese are on his farm for around six months up until the lead up to the festive period, after which he rears 1,800 chickens over the summer.

He also has poll Dorset sheep, which lamb in spring, and a small herd of 65 Aberdeen Angus and Hereford beef cattle, which together make optimum use of his time throughout the year.

“We deliberately try to farm following the seasons – it makes life easier for us,” explains Oliver, who is currently being helped on the farm by WWOOF (Worldwide Opportunities on Organic Farms) volunteers Nick Fearns and Frances Drachenberg.

“One of the reasons I started with geese is that they’re great grazers. Their natural diet is to eat lots of grass.

“An acre is enough for around 50 birds – they need quite a lot of space to graze. They’re good at cleaning fields of weeds: they like to dig holes with their beaks and really get into it. At the same time, they deposit plenty of nitrogen-rich manure.”

Oliver keeps his geese in fields near his home so that he can watch out for foxes, taking on a couple of alpacas this year to boost the level of protection. There is also a shelter to provide a protected space away from predators as dusk falls.

As Christmas approaches, the birds are taken to a licensed abattoir to be despatched, with Oliver loading up his trailer and making the journey at night so that the birds are more relaxed.

Looking back, he recalls his first year of rearing geese as being much more of a challenge, with his initial optimism leading him to exceed the breeder’s recommendation for just 30 to 50 goslings, which he later had to get through one of the coldest Decembers for many years.

Subsequently, he realised that locally distributed fliers would not generate enough of a market for his birds so cast his net further afield by setting up a website at www.farm2fork.co.uk.

Even when the orders came in it was not plain sailing, however, with a stressful period while he sought a UK-wide carrier to look after deliveries.

“I was warned not to start too high too soon; the challenge is to find the customers rather than growing the birds,” explains Oliver. “I learned a lot during my first year and everything grew from there.

“For the first few years, I used to dread the approach of Christmas. It was vitally important to me to make sure the birds were in perfect condition as Christmas dinner is such an important meal for families.

“Fortunately I’ve now been doing it for eight years and, while the quality is paramount, I’m more relaxed. This year has been quite tough, starting with the Beast from the East affecting hatching, but we’ve got through it.”

Oliver says he’s proud to keep geese because of their particular breeding patterns, making them all the more special, together with their engaging characters.

“They’re a pleasure to have on the farm,” he says. “They’re majestic and I love the constant noise they make. They do everything together: sometimes it can be quiet, with just the sound of murmuring chatter, and then all hell lets loose! For me, the silence on the farm after the geese have gone is quite hard.”

For Oliver, the only way is up for goose.

“It’s having a renaissance,” he says. “The custom of eating them at Christmas is coming around again. It just ticks all the boxes. It’s seasonal and unique to this time of the year, they are free-range birds that enjoy a good quality of life and they have a superb flavour. They are a much more natural product.”

Visit our Goose page to learn more about our geese and to order yours for Christmas.

This is an article from the Western Daily Press, Wednesday, December 5, 2018. Words by Sue Bradley. Photo by Steve Roberts. See more articles from the WDP at www.somersetlive.co.uk